Some of my friends were harassing me all over 2011 to get wallpapers.

The January wallpaper is a over/under shot from Kri Eco Resort jetty. I hope it brings some sunlight, warmth and well being into your homes and/or offices

Summer is over and we find more and more golden leaves flying in the autumn winds.  Here are some sun beams straight from Manado. I would love to swim amidst these trigger fish right now.

Here some thoughts…
During the summer of 1999 Gabriel Garcia Marquez, winner of the 1982 Nobel Prize for Literature and author of such classics as One Hundred Years of Solitude, was treated for lymphatic cancer. In the wake of that, there were persistent rumors about his failing health. Then this text appeared as being his farewell letter in several newspapers. It later turned out that Marquez’ condition hadn’t worsened (fortunately). This text was written by a Mexican ventriloquist named Johnny Welch.
LA MARIONETA
If for an instant God were to forget that I am rag doll and gifted me with a piece of life,
possibly I wouldn’t say all that I think,
but rather I would think of all that I say.
I would value things,
not for their worth but for what they mean.
I would sleep little, dream more,
understanding that for each minute we close our eyes we lose sixty seconds of light.I would walk when others hold back.
I would wake when others sleep.
I would listen when others talk,
and how I would enjoy a good chocolate ice cream!
If God were to give me a piece of life,
I would dress simply,
throw myself face first into the sun,
baring not only my body but also my soul.
My God, if I had a heart, I would write my hate on ice,
and wait for the sun to show.
Over the stars I would paint with a Van Gogh dream a Benedetti poem,
and a Serrat song would be the serenade I’d offer to the moon.
With my tears I would water roses,
to feel the pain of their thorns,
and the red kiss of their petals.My God, if I had a piece of life…
I wouldn’t let a single day pass without telling the people I love that I love them.
I would convince each woman and each man that they are my favorites,
and I would live in love with love.
I would show men how very wrong they are to think that they cease to be in love when they grow old,
not knowing that they grow old when they cease to love!
To a child I shall give wings,
but I shall let him learn to fly on his own.
I would teach the old that death does not come with old age,
but with forgetting.
So much have I learned from you, oh men…

I have learned that everyone wants to live on the peak of the mountain,
without knowing that real happiness is in how it is scaled.
I have learned that when a newborn child squeezes for the first time with his tiny fist his father’s finger,
he has him trapped forever.
I have learned that a man has the right to look down on another only when he has to help the other get to his feet.
From you I have learned so many things,
but in truth they won’t be of much use,
for when I keep them within this suitcase,
unhappily shall I be dying.

Here comes the new wallpaper for July. This little hawkfish just settled down for a couple of seconds on this green featherstar  when I passed by during one of my dives around Anilao last year. I tried different lightening techniques. This is the one I love best.

CClick on the image to download the wallpaper size 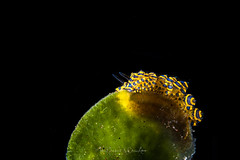 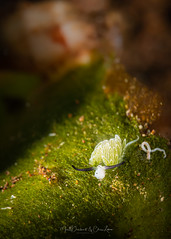 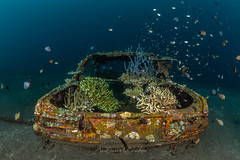 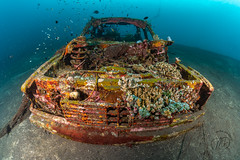